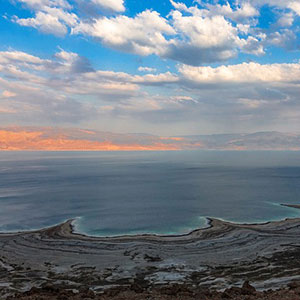 See Israel and Jordan on this guided tour of the historic Middle East, and enjoy shorter travel time, fewer crowds, and lower costs than the busy travel season. Begin in Tel Aviv, stop in the port of Jaffa, then through the Holy Land to Caesarea to visit the Roman Amphitheater and Crusader Fortress, and in Nazareth in Galilee, to visit the Church of the Annunciation. Stop in Cana-site of Jesus’ wedding miracle-on your way to Haifa. Visit the sites of Jesus’ life, including the Mount of Beatitudes and Capernaum. Travel to David and Goliath’s Valley of Elah; Samson and Delilah’s Valley of Ayalon; and cruise on the Sea of Galilee. You’ll also visit the birthplace of Jesus in Bethlehem, and enjoy a four-night stay in Jerusalem. Take an excursion to Yad Vashem Holocaust Memorial, and visit the Israel Museum, which holds the Shrine of the Book, and the Dead Sea Scrolls. Visit Jerusalem’s Old City, the Garden Tomb, and the Mount of Olives. See the Garden of Gethsemane, follow the Stations of the Cross along the Via Dolorosa, and visit the Church of the Holy Sepulchre at the site of the crucifixion. View the Temple Mount, the Dome of the Rock mosque, and visit the holy Western Wall; take an excursion to historic Masada to visit the cliff-top fortress; and float in the waters of the Dead Sea-with fewer crowds in this low-season travel to Israel. In Jordan, travel to Bethany Beyond the Jordan, where John the Baptist is said to have baptized Jesus; Madaba with its archaeological treasures; Mount Nebo, where Moses saw the Promised Land; and Jordan’s “Grand Canyon” at Wadi Mujib. Take an exciting four-wheel drive through the pristine desert of Wadi Rum. Visit Petra, one of the New 7 Wonders of the World-stand in awe in front of the 1st-century-BC Treasury, carved into the sheer sandstone rock, and walk down the Siq, the colorful gorge between the high cliffs; also sip tea in a real Bedouin tent. From Jordan’s capital Amman, travel to the Greco-Roman city of Jerash. Ancient sites and fascinating landscapes await you on this off-season guided tour of Israel and Jordan-without the crowds, costs, or lengthy travel schedule of the high season!

TEL AVIVWelcome dinnerJAFFAWalk around the ancient portCAESAREAVisit the Roman Amphitheater and the Crusader fortressNAZARETHVisit the Church of the AnnunciationCANAVisit the site of the first miracleHAIFAVisit the Baha’i ShrineMOUNT OF BEATITUDESVisit the site where Jesus delivered his sermonCAPERNAUMVisit the site where Jesus recruited his followersJORDAN RIVERVisit a baptismal siteSEA OF GALILEEEnjoy [LF] a cruiseLATRUNVisit the site of David’s victory over Goliath in the Valley of Elah and the Monastery of the Trappist Monks in LatrunBETHLEHEMVisit the Church of NativityJERUSALEMVisit the Israel Museum, Yad Vashem, and Mount Zion; guided walking tour; the tomb of King David, the Upper Room, the Garden Tomb, a panoramic view from the Mount of Olives; visit the Garden of Gethsemane, follow the Stations of the Cross along the Via Dolorosa, visit the Church of the Holy Sepulchre, the Western WallMASADARide a cable car and visit the cliff-top fortressDEAD SEAExperience the buoyancy feeling in the Dead Sea waterJERASHVisitWADI RUMVisit the largest wadi in Jordan and [LF] enjoy a four-wheel drive to the desert of Wadi Rum and receive a local scarfPETRAGuided sightseeing, including [LF] the Siq and the Treasury; sip tea in a Bedouin tentKERAKVisit the Crusader CastleWADI MUJIBVisit the Jordanian Grand CanyonMADABAVisit St. George’s Church and the Archaeological MuseumMOUNT NEBOVisit the mountain where Moses saw the Promised LandBETHANY BEYOND THE JORDANVisit the site of John the Baptist’s settlementDEAD SEAFarewell dinner

AMMAN — Jordan’s capital and largest city (pop. 972,000) is situated just a short drive from the Syrian and Israeli borders (about 45 mi/72 km northeast of Jerusalem.) The area has been constantly inhabited since 6000 BC, though only a few of its ancient buildings endured. This somewhat drab, although modern, city was not much more than a village until it became the seat of government in the 1920s — since then it has evolved dramatically. (Its population swelled with the arrival of succeeding waves of dislocated Palestinians, who today make up a bulk of the city’s residents.)

Sit in on a performance in the 2,000-year-old Roman amphitheater (it holds 6,000) or the new Royal Cultural Center. Also visit the Basman Palace, the city’s Folklore Museum, Museum of Popular Traditions and the National Archaeological Museum. Tour the Forum and Citadel Hill to see the few remaining Roman ruins (including a temple of Hercules). The hill provides a vast picture of Amman and is a serene escape from Amman’s bustling atmosphere. The Jordan National Gallery displays modern Jordanian and Middle Eastern art and the university merits a visit. Don’t miss the huge King Abdullah Mosque, built in the late 1980s.

A short drive west of town in the Wadi Seer Valley are the ruins of Qasr al-Abid Castle and the Araq al-Amir Caves. An journey can be made to the nearby towns of Ajlun (see separate paragraph) and Salt (13 mi/21 km northwest of Amman — features enchanting 19th-century carved-stone architecture). Allow at least a day in Amman.

Haifa (hì¢fä), city (1988 est. pop. 225,000), NW Israel, on the Mediterranean Sea. It is a major industrial center, a railroad hub, and one of the main ports of Israel. Haifa is known to have existed by the 3rd century A.D. and was destroyed (1191) by Saladin. The city’s revival began in the late 18th century; development of its port in the 20th century led to its main growth. It is the world center of Baha’ism.

Jerusalem, (je-r¡´se-lem) city (1991 est. pop. 535,000, including East Jerusalem), capital and largest city of Israel, on a high ridge W of the Dead Sea and the Jordan R. A holy city for Jews, Christians, and Muslims, Jerusalem is an administrative, cultural, and tourist center. Manufactures include cut and polished diamonds, plastics, and clothing. The eastern part of Jerusalem is the Old City; the New City, to the south and southwest, has been largely developed since the 19th cent. and is the site of the Knesset, Israel’s parliament. Archaeology indicates that Jerusalem was already settled in the 4th millennium B.C. David captured it (c.1000 B.C.) from the Jebusites (Canaanites), and after Solomon built the Temple there (10th cent. B.C.), Jerusalem became the spiritual and political capital of the Hebrews. The city fell to many conquerors, e.g., Babylonia (586 B.C.) and Rome (63 B.C.), and it was the scene of Jesus’ last ministry. The Roman emperor Titus destroyed the rebuilt (Second) Temple (A.D. 70) to punish rebellious Jews. The Muslims, who believe that Muhammad ascended to heaven from the city, treated it well after they captured it in 637. It was conquered by the Crusaders in 1099 and was recaptured (1187) by the Muslims under Saladin. Jerusalem was the capital (1922-48) of the
British mandate of Palestine.

During the Arab-Israeli Wars, the city was divided (1949-67); the Old City became part of Jordan and the New City became the capital of Israel. In 1967 Israel captured the Old City and formally annexed it. Israel reaffirmed its annexation of the Old City in 1980, an action not accepted by many nations. The Old City contains many holy places of Christianity, e.g., the Church of the Holy Sepulcher; of Islam, e.g., the Dome of the Rock (688-91); and of Judaism, e.g., the Western (or Wailing) Wall (part of the Second Temple

Tel Aviv-Jaffa, city (1989 est. pop. 330,000), W central Israel, on the Mediterranean Sea. It is Israel’s second largest city, its financial and commercial center, and a major diamond-processing center. The city is also a tourist resort with wide, attractive beaches.

Tel Aviv was founded (1909) by Jews from Jaffa, a major Arab population center, and its population grew dramatically after 1920. It was Israel’s first capital (1948-49) and many foreign embassies are still located in the city. A cultural center, it is the site of many theaters, leading museums, and several musical organizations, including the Israel Philharmonic.
Tel Aviv and Jaffa were merged in 1950. During the Persian Gulf War the city was subjected to Iraqi missile attacks.

Prices are per person, land or cruise only, based on double occupancy. Offer subject to availability and change without notice. Some restrictions may apply. Please ask us for details.

Charges not included in the land vacation price: airfare to and from the start of your vacation; airline baggage fees including checked and/or excess baggage fees; Federal inspection fees for the Federal U.S. Customs and Immigrations; agricultural tax; other per person taxes imposed by government entities; applicable cruise taxes, fees, fares and port charges; passports; visas and vaccinations; transfers; tips to your Tour or Cruise Director, Local Host, driver, Local Guides, and/or ships’ crew; gratuities on ferries, trains, and cruise ships; laundry; telephone; minibar; alcohol, beverages, and food outside of the contracted menu as presented at a hotel or restaurant (these extra items will be billed to you before leaving the hotel, ship, or restaurant); additional excursions and activities not listed as ‘included’ in the itinerary; porterage at airports or train stations; Travel Protection premiums; and all other items of a personal nature.

Click on the buttons below to request a quote on this deal or contact us directly with further questions or comments.

Request A Quote Send To A Friend Have A Question? Contact Us

Send To A Friend

Please don't close or refresh the page while we are processing your submission
Please be patient, this could take a few minutes.